Can Marijuana Help with Multiple Disorders?

Can marijuana help treat multiple disorders? This is a common question that most people are looking for answers to.

While marijuana legalization differs from state to state, 33 states and the District of Columbia have legalized medical marijuana to treat various medical conditions, with more being in the process of doing so.

The FDA has approved marijuana for the treatment of two rare forms of epilepsy. Since the U.S. Drug Enforcement Administration (DEA) classifies marijuana as a Schedule I drug, little research has been done regarding this amazing plant.

Continue reading to learn whether marijuana can help in multiple disorders.

Marijuana, also known as weed, bud, herb, ganja, and many other slang terms, refers to the dried flowers and leaves of marijuana plants. Marijuana has mind-altering compounds like tetrahydrocannabinol (THC) and cannabidiol (CBD), which is not psychoactive.

Also Read:- CBD For Insomnia: Amazing Benefits And Side Effects

An increasing number of people are turning to CBD products to help treat multiple disorders, including anxiety and depression, multiple sclerosis, chronic pain, insomnia, cancer pain, and many other disorders.

Although more research is needed to determine CBD benefits in treating multiple disorders, preliminary research on marijuana has shown promising results. That’s why we’ve witnessed a surge in the number of CBD brands in the market today.

Multiple sclerosis (MS) is a serious and chronic condition with symptoms that affects the quality of life. According to the National Multiple Sclerosis Society, about one million adults in the United States have MS.

MS causes the immune system of the victims to overreact, damaging cells in the brain, optical nerves, and spinal cord. Depending on your condition and marijuana legalization in your state, the National Multiple Sclerosis supports the use of marijuana for Multiple Sclerosis.

CBD benefits for people with MS include:

Marijuana news has dominated the airwaves in recent years, with many people reporting that marijuana helps them cope with multiple anxiety disorders. In fact, mental health disorders are among the reasons why people use medical marijuana.

The endocannabinoid system plays a vital role in how our bodies process stress and anxiety. The two main active ingredients of marijuana plants (CBD and THC) have different effects when it comes to anxiety disorders.

On all doses that have been tested, CBD has been shown to decrease anxiety. On the other hand, THC is effective in reducing anxiety at lower doses and increasing anxiety at higher doses. Whether you are having a social anxiety disorder, generalized disorder, or panic disorder, medical marijuana will be helpful.

Epilepsy is a chronic disorder that affects about thirty million people worldwide. Epilepsy symptoms include convulsions, sudden attacks, and other uncontrolled movements.

As stated earlier, the FDA has approved Epidiolex, a CBD-based formulation for the treatment of Dravet syndrome and Lennox-Gastaut syndrome (LGS) for children under two years. When used with traditional seizure medication, CBD helps reduce the frequency of seizures in children and adults.

Insomnia and sleep disorders are not uncommon among people, with statistics showing that between 50 and 70 million U.S. adults experience sleep disorders. Many in the cannabis community believe that marijuana is an effective remedy for a range of sleeping disorders with little to no side effects.

A 2008 study showed that ingesting marijuana strains with higher THC levels helped reduce the amount of REM sleep. As a result, it helps reduce nightmares for people with PTSD. Marijuana helps with sleep disorders by restoring a person’s natural sleep cycle.

The following are ways to take marijuana for multiple disorders:

How long does marijuana stay in your system?

As with other drugs, various factors will determine the duration that marijuana stays in your system. They include the level of THC in marijuana, frequency of use, and hydration.

Although marijuana is effective in treating multiple disorders, it comes with side effects, including:

Talk to your doctor or marijuana dispensary experts to determine the best CBD strain for your condition and the right way to use it. 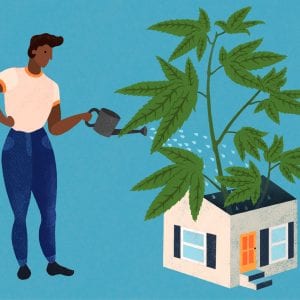