3 Ways to Inhale Weed Properly for an Amazing Experience

Whether you have been inhaling weed for years or a newbie, this article is for you. Learning how to inhale weed properly is essential if you want to get higher.

For starters, it is imperative to understand that inhaling weed is different from smoking cigarettes. While there is no healthiest way to inhale weed, some methods are less harmful than others. In this post, we take you through three methods to inhale weed properly.

What is the Best Way to Inhale Weed?

Let’s face it, inhaling weed for the first time is not as easy as it seems. Before you choose any CBD brands, it is imperative to understand that there is a considerable difference between smoking cigarettes and inhaling weed.

Also Read:- Effects Of Marijuana On The Body And Brain Maturity

Cigarette smokers inhale pretty quickly and flick the end of the butt to remove the ash. The case is entirely different when inhaling weed.

For better results, inhale weed slowly and nicely and continue inhaling even when the smoke is in your mouth.

Staying with motionless smoke in your mouth or swallowing it is an ineffective way to inhale weed. Instead, continue inhaling your weed while drawing the smoke into your lungs until you reach the climax.

Of course, you need to breathe in fresh air through your nose during the process. After holding the smoke long enough, breathe the smoke back out slowly. This way, you will experience a fantastic high.

To that end, here are three top ways to inhale weed:

Joint is the most popular way to inhale weed. In this case, you need to crush some weed, roll it up before taking the hit. Unlike cigarettes, you need to light up your joint and then start puffing.

Wait until when the joint is burning evenly before puffing. Just remember, since smoke can have far-reaching effects on your lungs, start small and increase gradually as you build your tolerance.

Due to the dangers associated with smoke inhalation, many folks think that vaping is the best alternative to smoking. But is this usually the case?

Studies show that vaping (just like smoking) can have serious health effects. This is partly because vaping involves inhaling vitamin E acetate, an additive chemical in many THC vaping products.

According to the Centers for Disease Control and Prevention (CDC), Vitamin E acetate is linked to lung injury and death due to vaping or e-cigarette.

However, according to one study, the risk applies more when vaping concentrates than vaping actual cannabis. That means that the risk of vaping cannabis flower is less compared to smoking.

Besides, vape enthusiasts claim to experience more potent effects than when smoking cannabis. Whichever the case, ensure to choose the best CBD products for you and learn how to inhale vape weed.

Bongs involve a much more intense inhalation, meaning you will draw in a lot of smoke. A bong comes with a stem with a bowl at the end. Before you light up your bong, fill the compartment with weed.

After that, start drawing in the smoke. For a breath-taking experience and stronger inhale, allow some fresh air into the process. When you reach the climax, remove the bowl from the bong but do not stop inhaling.

Many people make mistakes when inhaling weed for the first time. To have a better experience, reduce costs, and probably share your knowledge with novice cannabis users, learn how to inhale weed early enough.

Challenges You Will Encounter When Inhaling Weed

As with many other things in life, weed inhalation has some challenges, including burning throat and coughing.

A burning throat is a common challenge for people inhaling weed for the first time. It is caused by hot smoke from the lit weed, especially joints.

You can avoid this by using a bong since they have water that helps filter the smoke before it hits your lungs.

Coughing is another problem that you will experience at some point when inhaling weed. To reduce the chances of coughing, begin with small hits. This way, your lungs will build up inhalation tolerance and become cough resistant.

Do You Have to Inhale Weed to Get high?

Now that you know how to inhale weed correctly, you may be wondering whether there is a more healthy way to consume weed aside from inhalation. The good news is that there are other ways to consume weed, including:

If you must smoke, it’s imperative first to learn how to french inhale weed properly. Among other things, use high-quality rolling papers (FDA approved), ensure your stuff is clean, and avoid sharing pass joints. 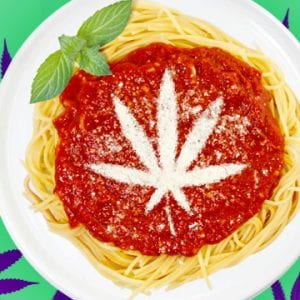