Though store-bought medicine can certainly help soothe your ailments, why not use nature’s own organic painkillers to make you feel better? Cannabis has been helping people all over the world fix their health issues for centuries. But what exactly gives marijuana those healing compounds that can make us feel better? Cannabis contains CBD, or cannabinoids, which are compounds that work in conjunction with our body’s own endocannabinoid system.

What are cannabinoids and CBD? (benefits of CBD)

Cannabinoids are all responsible for different healing aspects, from treating depression to fighting different kinds of cancer. CBD is a kind of cannabinoid. As we mentioned before, they work with the endocannabinoid system in our body, which controls processes and functions such as the potential for fertility, sleep, appetite, mood, and memory. It can also affect the liver and cardiovascular function, along with the growth of bone and formation of muscle. Even without using cannabis, this system exists within us.

There are three main components in this complex system, otherwise referred to as ECS: Endocannabinoids (otherwise known as endogenous cannabinoids), enzymes, and finally, receptors.

Endogenous cannabinoids exist in our bodies without weed, and they keep our internal biological processes running as smoothly as possible. We produce them as required, but it’s tough to know the standard levels for each cannabinoid. So far, scientists have determined that 2-arachidonoylglyerol and anandamide are the most essential endocannabinoids our body produces.

What are terpenes, and how do they relate to cannabinoids?

Cannabinoids and terpenes have an important relationship, though they are fundamentally different. They’re natural essential oils responsible for the aroma and flavor of many foods and plants. Over 20,000 terpenes exist, cannabis carries at least 100 of them. Both Indica and Sativa plants have different terpenes – these terpenes can help you figure out what kind of strain and plant your cannabis is. The most popular  terpenes are Myrcene, Pinene, Caryophyllene, Linalool and Humulene.

Myrcene: With anti-inflammatory powers and properties of sedation, Myrcene is popular and the basis of most Indica strains.

Pinene: This is also anti-inflammatory but provides a mood boost that Myrcene does not.

Caryophyllene: With a peppery flavor, people with depression and anxiety often benefit from this.

Linalool – A stress buster and facilitator of relaxation.

Humulene – Used as an appetite suppressant and antibacterial purposes.

How many cannabinoids are there?

There are over 114 cannabinoids that cannabis products, but no one knows the exact number. They are stored in the marijuana leaves crystals, otherwise known as trichomes. CBD (used to treat multiple psychiatric and physical conditions) and THC, (responsible for that psychoactive  “stoned” feeling) are the most famous cannabinoids. Other prominent ones are:

CBN – As THC degrades, this is formed. It’s associated with painkilling and antibiotic qualities, as well as an inducer of sleepiness.

THCV – Only fund in certain strains, this acts on both receptors and suppresses appetite while reducing anxiety.

Delta-8-THC – Has the potential to shrink tumors and prevent chemo-related nausea and other side effects.

Outside these important terpenes, an unsung hero is the root of the cannabis plant. In ancient Chinese medicine, it was dried and ground, then applied as a paste to broken bones for pain. It can also be boiled in tea and used as a diuretic, pain and swelling reducer, as well as an assistant for painful childbirth.

How to buy weed and ways to consume your cannabis

There are also health products like cannabis suppositories, which can be inserted physically and are potentially more effective, since the pelvic area and colon carries tons of CB1 and CB2 receptors.

Cannabis suppositories are made by blending CBD oil and a carrier oil. It’s a good alternative if you can’t swallow pills or orally administrate medicine.

Does CBD have any side effects?

Even though you can’t get “high” from this compound, CBD side effects do exist. It can interact with pre-existing meds like blood thinners and lower your appetite. It may also cause diarrhea and fatigue, or at least a feeling of general drowsiness. 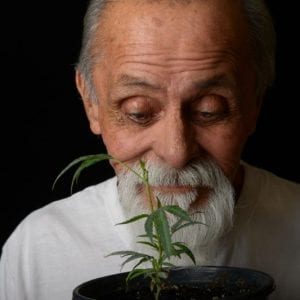