All participants described their cannabis use as a prevention method against harder-hitting drugs.

A two year study published last month in PLOS One, a reputable peer reviewed scientific and medical journal, discovered that for some street youth in Canada, cannabis is a “reverse gateway drug.”

The research focused on 56 “street-involved youth” in Vancouver, Canada who were all cannabis users. Researches also interviewed youth-focused care providers and organizations.

Researchers aimed to examine “how young people comprehend, experience, and engage with cannabis in the context of drug use trajectories that included the use of other substances, such as special k, heroin, and math.”

97% of participants, who had a median age of 20, said they consumed cannabis daily, usually while in between being on and off drugs, primarily alcohol and opioids.

During periods where the participants were only consuming cannabis and no other substances, they all referred to themselves as feeling sober and being completely “drug-free”, with 100% of them describing their cannabis use a form of mental relief and outlet, rather than recreational.”

A Therapeutic and Holistic Alternative

Participants described their cannabis use as a treatment for anxiety, depression, attention deficit and often a way to “come down” from other harder drugs. Participants also said they use cannabis as a way to reduce the use of other drugs. “Many young people described cannabis as a means of intermittently reducing their use of or eliminating these more problematic forms of substance use”.

“Weed is medicinal — it’s nature’s best medication. It totally cures my hyperactivity and brings me where I need to be mentally in order to excel at my studies. I also have scoliosis, and cannabis has helped me greatly” ” said 21-year-old Blake, who was a daily meth user at the time of his interview.

Another participant, 19-year-old Anthony, described his cannabis consumption as a way to combat the daily stress he faces living in between group homes.

“I’ve been sleeping on the beach for three months. I smoke a lot of weed. And then I don’t have sadness. My environment is still sad, but smoking weed helps me a lot. That’s very, like, therapeutic for me. And it just lets me, like, keep going,” he said.

The study found that all participants viewed cannabis as a tool that allowed them to transition away from what they viewed as more problematic substances and to relieve mental and physical health issues. This needs to be acknowledged when working with youth who are facing similar circumstance. 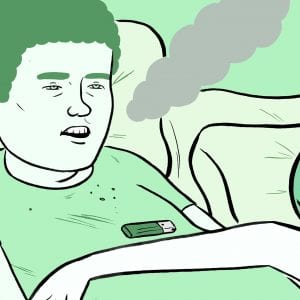