Have you ever imagine Strains can helpful in maintaining your weight? In this day and age, everyone is conscious of their weight and health. A good portion of folks do actively attempt to keep it in check but as a stoner, munchies can make this feel like an impossible feat! Cannabis is known to speed up your metabolism so that eating WITH the munchies is essentially less harmful to your weight than consuming goodies sober. When I was in college, a man boasted of losing 130 LBS over the summer and he told us he got high and did not eat when he had the munchies.

We all were in total disbelief lol but it turns out science says he was speaking the truth! Wildly enough, some cannabis contains a component called THCV (tetrahydrocannabivarin) which aids in suppressing appetites and can even be praised for assisting in various weight loss journeys. This chemical compound tends to be present in Sativa strains originating from the South Africa/Afghanistan regions. If you decide that the “smoke pot, ignore the munchies diet” isn’t for you and just want to avoid the side effect, altogether, here’s a list of strains that will bypass the intense urge to chew tasty things!

Durban poison is one heavy hitting, pure sativa. Reigning out of South Africa, this sticky icky contains a nice concentration of 1% THCV being one of the highest contents you can find. The sweet strain will leave you feeling energized and focused, so it is perfect for wake and bakes. Inducing you with creativity and the giggles, it’s hard to believe it provides the optimal energy levels in order to maintain this kind of active lifestyle but it’s quite a punch packed into the green buds.

Next up is a strain that was specifically crafted to contain an insane amount of THCV, Doug’s Varin. You can usually find it in flower form containing 3% of THCV or I have seen it available with a whopping 28% THCV in vapor form! Imagine how skinny 28% could make you! Lol, This one is amazing at suppressing appetite, it’s great for your bones and can even assist with maintaining the glycemic levels within your body. What medicine!

Let’s not forget our purps, Pineapple Purps to be specific. It boasts a THC:THCV ratio of 3:1 meaning it is high in THCV but the effects won’t last long. This sativa dominant strain will suppress your appetite, block a panic attack and even reduce Parkinson’s Disease tremors. It’s as helpful as it is beautiful! I personally would consume this strain just before a workout or right after waking up for a burst of energy./

The name is daunting but this strain is definitely one that’s sought after! This Sativa dominant hybrid, Jack the Ripper contains high levels of THCV and can often leave amateurs in a psychedelic state if they take a bit too much. It helps to regulate anxiety without feeling couch-locked all while assisting with keeping the munchies at bay!

As you can see, THCV is rare but can be found in some carefully selected strains. Most of which carry pungent, sour, sweet, and spicy flavors. Not only does this cannabinoid aid in suppressing the appetite but it’s also beneficial for those who experience Parkinson’s Disease tremors, Alzheimer’s tremors, anxiety attacks, irregular glycemic levels, resistance to insulin, and even those who would like to improve bone growth. If you choose to smoke one of these strains in a vaporizer, THCV takes a bit more heat to be activated than the common THC cannabinoid.

A temp of 428 degrees Fahrenheit will be imperative to getting the effects of THCV. Don’t forget, this high will last a bit less long than your usual THC intensive strains. However, these components are great for those looking for specific improvements in everyday life and to assist us in potheads with weight loss. Even if the concept were to serve as a placebo! 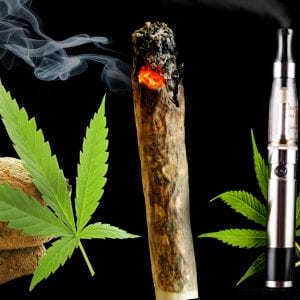 I am a fun loving sapio-sexual with a sense of humor that’s larger than life. I enjoy creating music, writing, foreign exchange currency trading and investing/mining Bitcoin. My goals in life include traveling the world, smoking all the marijuanas and building boxing gyms in low income neighborhoods for the youth (a boxing program saved my life when I was younger). I strive to better myself every day with meditation and self-help books and I work hard to eventually leave behind generational wealth.